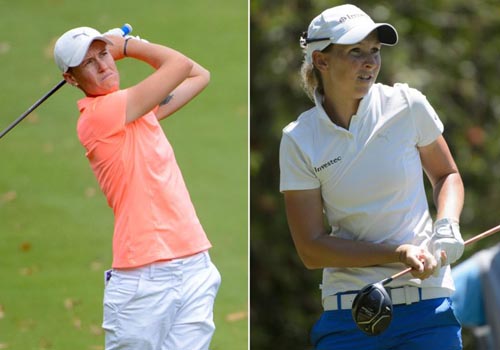 Home hero Monique Smit finished with a flourish on day two of the Sunshine Ladies Tour Dimension Data Challenge to join compatriot Bertine Faber in a two-way tie for the lead in George on Saturday.

To the delight of the local crowd, the Oubaai golfer birdied the last two holes for a four-under-par 68 that handed her the clubhouse lead on one-under 143.

Faber (nee Strauss) returned a two-under 70 to join Smit at the top of a congested leaderboard, with rookies Pasqualle Coffa from the Netherlands and Scotswoman Gabrielle MacDonald leading the chasing pack. 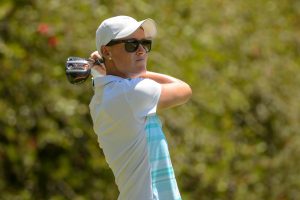 Smit won the first edition of the popular event in the Garden Route in 2014 for the first of her three Sunshine Ladies Tour titles. Looking to end the two-year title drought, she opened her account at George Golf Club with a 75 to start the second four off the pace.

“I was frustrated on the greens, but I came out hot this morning,” said Smit. “I birdied two and eight, and I was level through 16. The birdies at 17 came as a surprise. I didn’t hit a great tee shot and I had to hit a 7-iron in. I had a 20 foot putt, but as soon as I saw the line, I knew I’d nail it.

“I hit the best drive of the day at 18, picked a target and stuck an 8-iron 10-feet pin high. Today was all about picking targets and committing to the shots.”

“I didn’t play competitive golf for 12 months, but I played half-decent at Irene and the Serengeti Team Championship definitely helped restore my confidence. I am travelling with Clara Pietri from Switzerland and we teamed up for Serengeti. She reassured me that my body knows what to do; I just needed to make a mental commitment and I did that well today.

“It’s great to be in contention again. I am looking forward to the Outeniqua Course in the final round and playing with Bertine. It’s been a while for both of us, so it should be a really good battle.”

It’s been three years since Faber launched her rookie season with a Sunshine Ladies Tour hat-trick.

After a first round 73, the Koster golfer stumbled out of the blocks with a double bogey at the first, but bounced back with birdies at two and six and reeled in two more at 10 and 16. 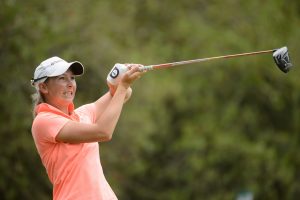 “Ironically, I watched a bit of the Genesis Open last night. Justin Thomas started with a double and when I checked the scores this morning, he was leading. It’s not the end of the world. I just stayed patient, made a few birdies and kept the bogeys off the card for the rest of the round. I made a really good par-save at 13 and it is that kind of moment that keeps the round going, more so than making a birdie.”

Strauss has some major swing problems in the last two years, and the Investec Property golfer is eager to get back in the winner’s circle.

“I’ve been in a couple of dark places in the last two years and it’s very exciting to be in with a chance this week. It’s been a while, but it’s not a new thing for me, so I’ll draw on past experience and I’ve luckily got my husband (Wian) on the bag. He was carrying for me with my first three wins, so hopefully he will be my lucky charm.”

Coffa was one-under with the last hole to come, but her approach shot pitched on the green and rolled off the back. “I had a tough chip and I couldn’t make the up-and-down, but I’m really happy to be in the top four,” she said after signing for a 70.

“It’s only my third start as a pro and it’s great to have a chance to play for my first win. I love the Outeniqua Course. It’s a lot more open and not so heavily tree-lined as here at George Golf Club, so you can get away with a less than perfect drive. I can’t wait.”

Macdonald was five under for the round after a trio of birdies at 13, 14 and 16, but gave a shot back to the field when she missed the green at the par-three 17th. “This is my first pro event and I’m over the moon to be in contention,” said the Craigielaw golfer, who tied Smit for the low round of the day.

“I played really well today and I made a lot of putts. I left a couple short for birdies coming up to 13, so it was nice to roll that one in and get the momentum going. I’m excited for the final round and hopefully I can keep the putter warm overnight.”

Joint overnight leader Kajal Mistry returned a battling 74 to tie for fifth on one-over with England’s Lauren Taylor and three-time Sunshine Ladies Tour winner Kim Williams. Frenchwoman Marion Duvernay, who shared the first round lead on one-under, finished at four-over after a 77.

Crizelda van Niekerk and Ash Pagden lead the Betterball Medal Pro-Am on nine-under after rounds of 66 and 69. Smit and four-time winner Larina King moved within two shots after a second round 66, with a further five teams also tied on seven under.ds