Williams takes route 66 to join Bringner at the top 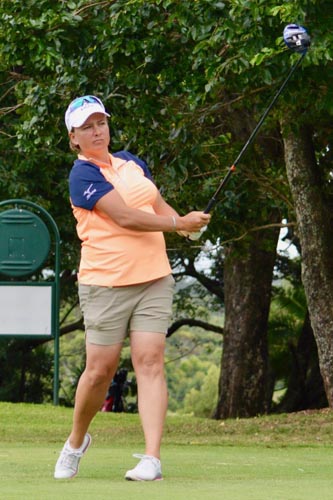 Kim Williams scorched her way around a breathless San Lameer Country Club with a superb six-under 66 to join Sweden’s Sofie Bringner in the lead on three-under overall after two rounds of the South African Women’s Masters on Friday.

In contrast to the first round where heavy winds swirled about for the entire day, hot and calm conditions greeted the players on day two.

The Centurion Country Club golfer made best use of the easier conditions to find 17 greens in regulation, and made eight birdies and just two bogeys as a result.

“It was a nice round, the last week I felt like my game was heading in the right direction. And for everything to work out today was nice,” said three-time Sunshine Ladies Tour winner Williams.

“My putter is starting to warm-up. I’ve been struggling with that since the beginning of the season. I made a few clutch putts, nice par-saves and then towards the end the birdie putts started dropping. My putting was definitely key today.

“Yesterday was really tough with the wind swirling quite a lot, so club selection was quite tough. I was happy with my score after yesterday. Yesterday I didn’t make a birdie, today I think I had eight birdies. The key is when you’re making drops, is to be able to come back.”

Williams led for most of the final round at the Dimension Data Ladies Challenge last week in George, before she was ultimately overtaken by Nobuhle Dlamini who ended with a two-stroke victory.

There will definitely be a hint of unfinished business for Williams, hoping to put that disappointment behind her.

“The last two holes today were pretty key. I saw four-under was the lead, so I knew if I had a strong finish I would have a better chance tomorrow,” Williams said. “I’m excited. I was in contention last week as well. I just hope I can keep it together and have a round like I had today.”

Overnight leader Bringner had led for most of the day, at one stage by three with an opening nine that included five birdies, and just two bogeys.

One of the key holes for The Hills Golf Club member was the par five eighth. There she was just short of the putting surface in two, but a poor chip from 30 metres left her with a monster putt over a steep ridge.

The hot-putter worked once more as the ball raced up the slope before taking a final left turn into the hole. “It was a good day on the course, and the first nine was very good. The putter was really hot today,” Bringner said.

“The putt on eight was about 20 metres, and very difficult with lots of slope and I just gave it a good roll and it went in.”

Just three shots behind the leaders were amateur Kajal Mistry (75 69), who tied for fifth with Williams at Fancourt, and last Sunday’s champion Nobuhle Dlamini (74 70).

Randpark’s Mistry produced an impressive three-under round which featured an eagle two at the par four sixth, which sent one interested spectator mad – her father Nilesh Mistry.

“I hit every fairway today and if I missed a green I was just in the first cut. So it was a stress free-round except for two three-putts I had,” said the 18-year-old GolfRSA Elite squad member. “I eagled number six. I hit three-wood off the tee and had 95 to the flag, so I hit a little knockdown gap wedge. It took two hops and dropped. My dad made a lot of noise with his screaming and clapping.”

Kiran Matharu from England, another former Sunshine Ladies Tour champion, is a further shot adrift after rounds of 73 and 72.

Scotland’s Hannah McCook and GolfRSA Elite Squad player Symone Henriques started the second round one off the overnight pace. McCook posted 74 to finish on two-over and Henriques returned a 75 to tie for seventh on three-over 147.