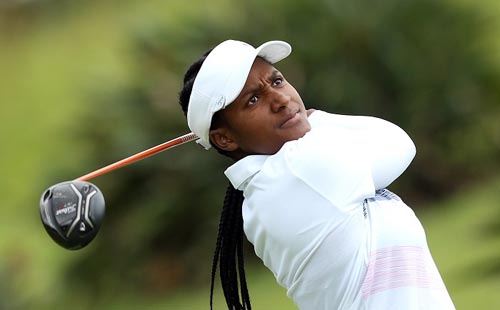 Current Investec Property Fund Order of Merit leader Nobuhle Dlamini will be looking over her shoulder when the inaugural Jabra Ladies Classic tees off at Glendower Golf Club on Wednesday.

Dlamini knows there is a target on her back after her lead was trimmed with a frustrating tie for 47th in the Investec South African Women’s Open last weekend, but with two events to go, the big-hitting Swazi national is determined to cement her position at her home course ahead of the season-finale Joburg Ladies Open at Soweto Country Club next week.

Dlamini returned to a happy hunting ground and was on the course at first light on Monday morning to fine-tune her game.

The Jabra Ladies Classic is the new addition to the 2019 Sunshine Ladies Tour schedule and this week’s winner will not only bank the lion’s share of the R200 000 purse, but will also join the field in the Jabra Ladies Open on the Ladies European Tour in May.

Gunning for her fifth Sunshine Ladies Tour title, Dlamini said a win would be a game-changer.

“I don’t have full status on the Ladies European Tour yet, right now, so I am on the reserve list for the Jabra Ladies Open,” explained the 2019 Dimension Data Ladies Challenge Tour champion.

“To get the spot in the Jabra Ladies Open is huge. A good performance at the Evian Golf Resort Golf Club can boost your ranking on the Ladies European Tour and that’s another step closer to full status.”

Dlamini came close to victory at Glendower two seasons ago when she lost in a play-off to four-time champion Carrie Park from South Korea and although a firm favourite this week, she expects stiff opposition from Benoni golfer Lejan Lewthwaite, who is targeting the same goal. 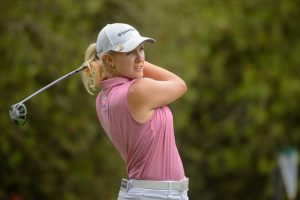 The reigning SA Women’s Masters champion was hoping for another strong performance on home soil after a top-10 finish on the Ladies European Tour in Australia, but she missed the cut and was overtaken by Randpark amateur Kajal Mistry, who moved into second in the rankings with a top-30 finish at Westlake.

“Six weeks in a row took its toll and I was dead-tired, but I know I can turn it around for the last two events,” said the Investec supported player.

Dlamini leads the rankings on 1 397 points. Mistry is second on 963 points and Lewthwaite third with 940 points, but the GolfRSA Elite Squad player will miss the season-finale to defend her Nomads SA Girl’s Rose Bowl title, leaving the way clear for Lewthwaite to challenge Dlamini in the points race.

“There is a lot to play for in the last two events,” the Serengeti golfer explained.

“Victory gets you into the Jabra Ladies Open. I’m 11th on the reserve list, so that’s the first goal. The Jabra Ladies Open is also the qualifying event for the Evian Championship. The winner and the runner-up get starts in the Evian and another Major, the AIG Women’s British Open. Plus full category status on the Ladies European Tour for 2020.

“A win this week is worth 250 points, first place next week earns you 650 points. That’s the other big incentive this week. But the stakes are high and everyone wants to win.

“I’m not sure, but I think Stacy Bregman might be the only player in the field with full LET exemption. She had a great final round at Westlake to finish 12th, and she won’t cut us any slack. At least Jabra will give the spot to the next best finisher who isn’t exempt up to 20th place.”

“Both of them are strong ball-strikers with incredible short-games and that’s scoring at Glendower. Good, straight tee shots and good putting. I’ve played a ton of golf here and it’s definitely one of my favourites. It’s a great test of golf and I’m looking forward to a strong finish to the last two events.”

Sweden’s Emma Westin – a three-time winner on the LET Access Series – also made a strong case for victory this week with a top-20 finish at Westlake, as did Ellie Givens from England, whose final round 71 boosted her to a tie for 36th.