Caudal charges back to winning ways with Jabra 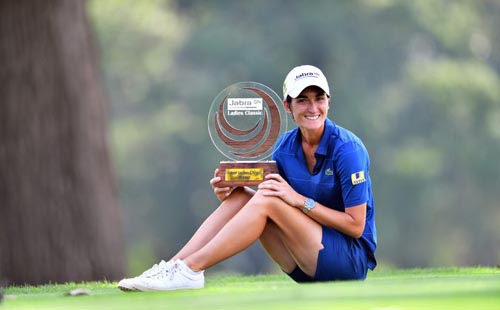 The slogan this past week at the first Jabra Ladies Classic on the Sunshine Ladies Tour was ‘Make Life Sound Better’. Life is definitely sounding super sweet for Anne-Lise Caudal after she edged out crowd favourite Nobuhle Dlamini to win the inaugural tournament on Friday.

The French golfer closed out a two-shot victory on four-under 212 with a one-over-par 73 to end a seven-year winning drought at Glendower Golf Club.

Dlamini from Swaziland carded 75 to finish second, while 14-year-old GolfRSA Elite Squad member Kiera Floyd from Ebotse returned a 73 to take the amateur honours with a third-place finish on level par.

Victory earned Caudal a winner’s cheque worth R28 000, 250 points that lifted her to fifth in the Investec Property Fund Order of Merit race and a start in the Jabra Ladies Open on the Ladies European Tour in May.

Sopping wet, but smiling broadly after her fellow Sunshine Ladies Tour pros doused her on the 18th green, the Saint-Jean de Luz native said: “This is my first win since I beat Laura Davies in the 2012 Unicredit German Ladies Open and this is a really special moment for me. A win is a win, and it doesn’t matter if it is here or on the Ladies European Tour. You still have to play to win. I am so very, very happy to be a champion again.”

Caudal and Dlamini were tied for the lead on five-under at the start of the final round, but Dlamini had the early advantage after Caudal got off to a bogey start.

“I hit a bad tee shot and I had a bad lie; I struggled to make a bogey, but I like the par five, the second,” said Caudal. “I hit two great shots, pitched it close and made the birdie putt to get back to level for the day. It’s always good to make a birdie after a bogey when you are leading, because that puts the pressure on your opponent.”

Caudal had further bogeys at four and six, while Dlamini also backpedalled with bogeys at two and six and a triple at the par four seventh.

The Swazi national matched Caudal with a birdie at 10, but Caudal took a two-shot lead and never relented. Both players birdied the par five 15th and bogeyed the short 17 before closing out the round with pars at 18.

“It wasn’t pretty golf,” Caudal said. “Nobby hit a few bad shots off the tee, but she rallied with great par saves. I didn’t strike the ball as well as I did in the second round and I wasn’t in the best form with the putter, but I managed to make a bunch of pars to keep the momentum going.” 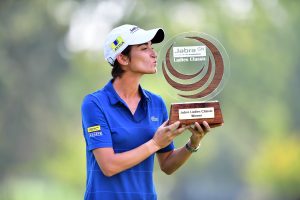 A recurring wrist injury hampered her comeback to the elite level in the sport, but Caudal believes she is back on an upward curve. “I feel like a winner again,” she said.

“I’ve been competing on the Sunshine Ladies Tour for six years, but this year is the first time that I have played the full season. I built a lot of confidence here; I came second and I was in the leading group a few times in the last two months. I’ve always built good form when I play three or four weeks in a row and I knew I was heading for a good week.”

Caudal was instrumental in bring Jabra to South Africa and elated that she could win the first event for her sponsor.

“I wanted to win for Jabra this week, to show them they are backing a winning horse. I wanted to get into the Jabra Ladies Open on merit, not with an invitation. I hope they will give the spot to Nobby,” she said.

“I’m really glad Jabra came out to the tournament this week and could see for themselves what a great circuit the Sunshine Ladies Tour is. The standard is high, it is a very competitive and there wonderful players who are great ambassadors for golf and South Africa.”

Caudal – the fifth new international champion on the Sunshine Ladies Tour this season – will go head-to-head with Dlamini again in the season-finale Joburg Ladies Open and the French golfer backs herself for more success at Soweto Country Club next week.

“I think next week is going to be another tight one,” she said. “It’s always tight at the end of the season and we are playing for big prize money, too, but I think I could challenge for two in a row. But first we are going to celebrate with a braai tonight at Nicole Garcia’s house.”

Floyd, who birdied the two par fives on the back nine and the par three 17th to finish third, received some special commendation from the 2019 Jabra Ladies Classic champion during prize giving.

“Kiera is going to be a star one day,” Caudal said. “She is just 14, but she didn’t back down from us in the last group and she played to win. She hits it so far and her short-game is really strong, so it won’t be long before she starts winning titles on the Sunshine Ladies Tour.”