Dlamini poised for success in Soweto 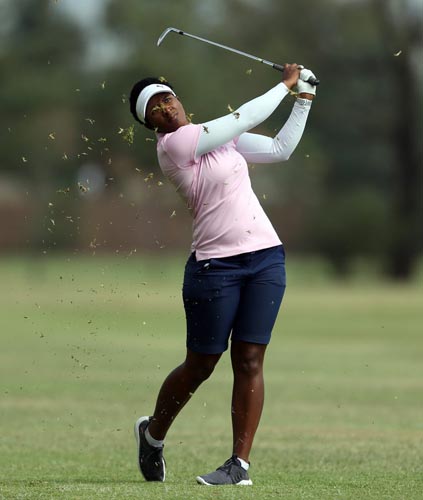 Nobuhle Dlamini fired three birdies on the bounce down the back nine of Soweto Country Club to line up a fourth Sunshine Ladies Tour victory in the Joburg Ladies Open on Wednesday.

Dlamini began the second round tied for the lead with reigning SA Women’s Masters champion Lejan Lewthwaite, but she opened up a one-shot lead with a second successive level par 72.

The Investec golfer is still nipping at her heels on one-over following a second round 73, while Sunshine Ladies Tour rookie Casandra Hall lies a further stroke adrift on two-over, courtesy of a brace of 73s.

Former SA Women’s Open champion Tandi Mc Callum got into the mix at four-over with an even-par 72.

India’s Tvesa Malik followed a one-over opening round with a 76 on day two to slip to a tie for fifth with 2019 SA Women’s Longest Drive champion Lenanda van der Watt, who returned a 74.

Yolanda Duma fired a one-under-par 71 for the shared low round of the day. The Border golfer rocketed to joint seventh on six-under, and will have former Sunshine Ladies Tour winners Stacy Bregman and Monique Smit for company in the final round.

Dlamini is justifiably in a confident frame of mind.

She will be gunning for the double in Thursday’s final round – win the R500 000 Sunshine Ladies Tour season-finale and bank the R100 000 bonus for winning the season-long points race and it will take something special to stop her.

“If I play like this tomorrow and make a couple more putts I should take it home “I’m looking forward to the incentive, but it would be great to win the Joburg Ladies Open.”

Dlamini followed a birdie start with a trio of bogeys and went out in two-over.

Coming home, the Glendower golfer birdied the 10th but a careless double-bogey on 11 got her into the right frame of mind. She fired three birdies in a row from the par four 13th to steady the ship and cemented herself at the top of the leaderboard with solid pars over the last three holes.

“I dropped on two of the par threes on the front nine, which was annoying,” Dlamini said.

“I made a good birdie on 10 over I overshot the green, but at the next hole I pitched it too close to the pin and it flew off the back. I chipped it short of the green two-putted for a double. I hit a great drive, so to drop two shots after being 78 metres from the hole hurt. But I’m proud of the way I came back after that.

“The greens were slightly softer in the second round, but not by much, so you really have to think your way around the course. My short game, especially the shorter pitches, was really good. If you can get it inside 12 foot, you’ve got a look at birdie, because the greens are very true.”

Aside from her obvious title ambitions, Dlamini was pleased to be playing an important golf event in the heart of Soweto.

“Whoever took the decision to make this a championship golf course has done so much for the people of Soweto, for the nation. I’ve got a lot of friends from Soweto, so they have to travel a long way to the nicer courses. Most of them can’t afford to play so it’s great to have a championship layout in their back yard.

“One of my friends actually lives a two-minute walk away from here and he came through yesterday and he said he can’t wait to play after we finish.

“A big thank you goes out to the sponsors for helping development. I’m happy that people from Soweto have jobs now, working at their own club. Hopefully we look after it, and it leaves a long lasting legacy.”

Lewthwaite, meanwhile, couldn’t replicate the fireworks from the first round, but she usually saves her best golf for the final round and could be strong contender on the last day.

“It was a little boring; no holes-in-one today,” Lewthwaite joked. “I played steady golf and I’m right where I want to be – within one shot of the leader.

“I don’t know what it is about final rounds, but I always seem to get going. Hopefully I can do the same tomorrow. I feel different in the body and the mind, I love the pressure and the tight competition at the end.”

Hall made a disastrous start with a triple bogey seven at the opening hole, but the Ebotse golfer rallied with a trio of birdies after the turn to stay firmly in contention.

“I hit it left on the first and paid the price and I was a bit panicky after that seven, but I just trusted my swing after that and I began to feel comfortable over the ball,” said last year’s SA Women’s Amateur Stroke Play champion.

“I held it together for the rest of the front nine and I was feeling great after the birdie run, but unfortunately I let another one slip at 17. I’m quite happy being two behind. Anything can happen in the final round, especially on this golf course.”

END_OF_DOCUMENT_TOKEN_TO_BE_REPLACED

Double delight for Dlamini in Soweto