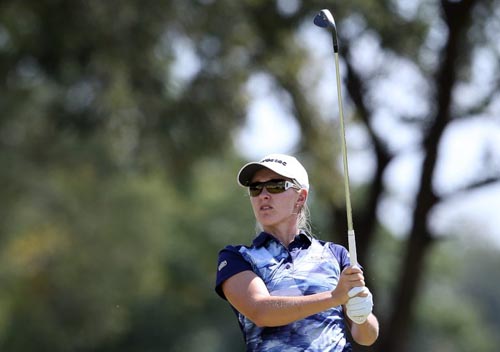 The cream really did rise to the top on Tuesday as the two main protagonists on the Investec Property Fund Order of Merit – Nobuhle Dlamini and Lejan Lewthwaite – both carded level par 72 to share the first round lead in the R500 000 Joburg Ladies Open at Soweto Country Club.

Coming off a runner-up finish in the Jabra Ladies Classic last week at Glendower, Dlamini has forged an almost unsurmountable lead on 1 597 point. Second placed amateur Kajal Mistry is skipping the season-finale to compete in the Western Province Amateur Championship. Lewthwaite is nipping at Dlamini’s heels in third, but another strong push in Soweto will see the Swazi national seal the deal and pocket to the R100 000 bonus in the season-long points-race.

Lewthwaite, who claimed her maiden Sunshine Ladies Tour title in the SA Women’s Masters at San Lameer last month, set the course on fire during the early stages of the opening round.

A steady two-under start through six holes was good, but her round quickly turned spectacular with an ace at the par three 17th.

“I had 173 metres to the pin playing downhill, downwind – and you have to pitch it short. If you pitch it on it’s going over. I caught a lucky bounce with a six-iron and it went in,” said the Serengeti golfer. “I said after the hole-in-one I didn’t really care what my score was, but it was fun getting my first one.”

The ‘perfect fluke’ helped Lewthwaite to go out in four-under 33, but coming home she dropped shots at the fourth and seventh before a disastrous double on her final hole (the ninth) saw her lead evaporate.

Despite her poor finish, Lewthwaite remained positive about her opening salvo in Soweto.

“It’s a pity I couldn’t finish better, but it’s the best position I’ve been in after the first round this season so I’m right where I want to be,” Lewthwaite said.

“I hit a perfect tee shot down the middle of the fairway, and actually hit a great second shot with the ball probably pitching pin-high with a gap wedge with 92 metres to the pin. I might have pitched it around 88 metres and the ball just rocketed over the green. Then I hit a bad chip and a bad putt to make double.” 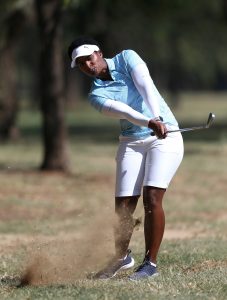 Dlamini, meanwhile, produced a quieter scorecard with just two bogeys offset by two birdies. That was despite overpowering a number of holes as she cut doglegs with the driver and even driving the par four 16th – where she could only manage par.

“I hit quite a few drivers, there are some holes where you can take a Tiger-line,” said Dlamini. “You can still find the ball if you miss the fairway, the challenge is just how close you can get it to the hole with your approaches. The second shots are the challenge.

“On the 16th hole I hit driver on the green. So I was hitting it really nicely. I’ll take 72 today as it was playing tough out there. It would be good for me to finish strong here. I’m going to keep pushing and hope for the best.”

Malik was more than pleased with her effort in just her third start on the Sunshine Ladies Tour after debuting in the Investec SA Women’s Open in Cape Town and contending in the Jabra Ladies Classic last week.

“I thought I played a little bit better than my score suggested. I made a few silly mistakes, but I’m happy with my score,” said Malik.

“I’m focussing on my game, I’m not really worried about my position with 36 holes to go.”

“I made a really good start in my debut in the Canon Sunshine Ladies Tour Open and then I set my expectations too high,” said the Benoni golfer. “The next six events were a steep learning curve, but I felt my confidence return at Glendower last week.

“It’s tough course and I’m happy to be within striking distance of the leaders. The greens are new and still very firm, so the biggest challenge here is to get the ball as close as possible to the pins. If you come in too hard, you fly the green and it’s tough to recover. It’s another great learning experience for us young pros this week.”

END_OF_DOCUMENT_TOKEN_TO_BE_REPLACED

Dlamini poised for success in Soweto