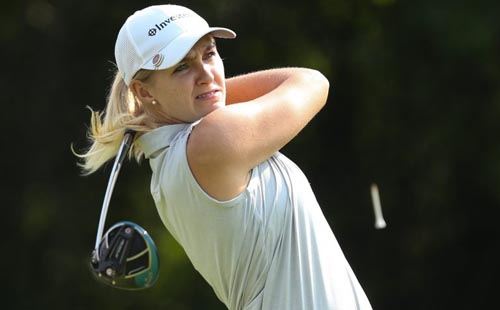 Lejan Lewthwaite has her sights set on a Sunshine Ladies Tour double in the 2019 Investec South African Women’s Open, which tees off at Westlake Golf Club on Thursday.

The Benoni golfer already enjoyed a stellar start to her 2019 campaign with a play-off victory in the SA Women’s Masters and is riding a wave of confidence after a top 10 finish in her second start on the Ladies European Tour last Sunday.

Lewthwaite had been knocking on the door since the start of the sixth season with a third place finish in the Canon Sunshine Ladies Tour Open.

She tied for seventh with partner Nobuhle Dlamini in the Serengeti Team Championship and then chased the Swazi golfer all the way to the finish line in the Dimension Data Ladies Challenge in George the following week.

A week later, the 28-year-old Investec standout celebrated her maiden win at San Lameer and now she is relishing the prospect of doing it all over again at Westlake Golf Club.

“I’m definitely a much better golfer now than I was a year ago heading into the Investec SA Women’s Open,” said the Serengeti golfer following her tie for 10th in the Women’s New South Wales Open in Australia.

“I am handling a big stage a lot better than I was last year. Competing on the IGT Challenge Tour last year and winning twice taught me a lot on how to keep your perspective when you get into contention and how to win.

“In my previous starts on the Sunshine Ladies Tour and in Europe, I let the status of the event dictate my game and frustration got the better of me. This time, I didn’t paint the Women’s NSW Open as such a big event. I just treated as any other golf tournament and I was able to play my own game. I went into the Women’s NSW Open with a strong mind-set and that’s what I’m bringing to Cape Town this week.

Lewthwaite will join a host of local and international champions in the R2-million event, co-sanctioned by the Sunshine Ladies Tour and the Ladies European Tour.

Defending champion Ashleigh Buhai, a 10-time winner on the local circuit and three-time Ladies European Tour champion, will be gunning for a fourth victory.

South Korea’s Carrie Park claimed her fourth Sunshine Ladies Tour title with a five-shot victory in the Cape Town Ladies Open at Royal Cape last week and Dlamini, who leads the Investec Property Fund Order of Merit, has also been in threatening form this season.

England’s Meghan MacLaren will be flying high after successfully defending her Women’s NSW Open title with a three-stroke victory on Sunday, while Christine Wolf from Austria and Valdis Thora Jonsdottir from Iceland – fourth and sixth respectively – could also be on the radar in Cape Town.

Other top contenders inside the top 30 on the Ladies European Tour Order of Merit to keep an eye on include Olivia Cowan from Germany, Sweden’s Julia Engstrom, Spanish pair Noemi Jimenez Martin and Silvia Banon and the French pair of Manon Molle and Isabelle Boineau.

Several Sunshine Ladies Tour rookies have also laid down a marker this season for success in the national Open.

Jane Turner claimed a four-shot victory in the SuperSport Ladies Challenge at the Wild Coast Sun Country Club, while fellow Scot Gabrielle Macdonald has climbed to fourth in the Investec Property Fund Order of Merit in just four starts.

Entry is free to all three rounds of the Investec SA Women’s Open and there is ample public parking.