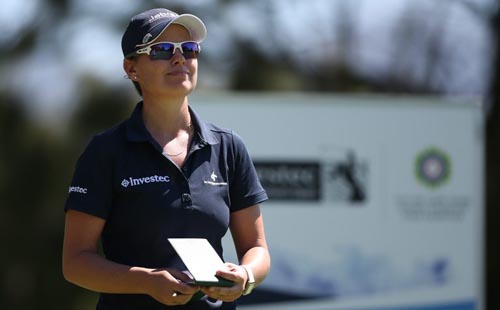 Former champion Lee-Anne Pace took control of the Investec South African Women’s Open on Friday and opened up a two-shot lead on the chasing pack at Westlake Golf Club on Friday.

The nine-time Ladies European Tour winner mixed five birdies with a solitary bogey for a four-under-par 68 and she will start the final round in familiar territory, having previously lifted the SA Open title in 2014, 2015 and 2017.

Playing alongside Pace in the final group on Saturday will be two fearless rookies, both of whom navigated the tight, tree-lined layout with flawless performances.

Indian left-hander Diksha Dagar took route 66 to move into second on two-under with a low round of the tournament and Esther Henseleit, whose five-under 67 lifted the German to third on her own on one-under.

Pace set herself a second round goal of four-under after an even-par 72 in the windy conditions on the first day. “I really wanted to be in contention, especially here in Cape Town where I have some family and friends watching,” said Pace. “I’m so pleased I was able to achieve it.”

After struggling in strong winds on day one, the morning starters arrived to sunny, wind still conditions, but Pace was one of only a handful of players to take advantage of early the scoring opportunities.

In what should serve as an ominous warning to her pursuers, the 11-time Sunshine Ladies Tour winner feels that the hard work she had put in over the off-season has given her complete control of her game. “I’m shaping the ball nicely both ways and I’m feeling like I have a lot of control on my approach shots, which is key because some of these greens are quite small,” she explained.

“I didn’t miss many shots today. I left a few putts out there and didn’t take advantage of the par fives I hit in two, so there is still room for improvement.” 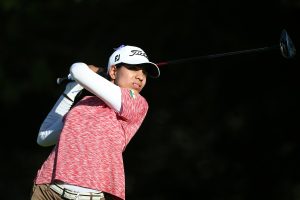 Dagar was four-over after the first three holes in her opening round, but she settled quickly after the nervous start and signed for a 76. The 19-year-old former World Deaf Championship winner and 2017 Summer Deaflympics silver medallist showed none of the first round nerves as she went around the course in 66 strokes.

“I was on fire today,” said Dagar, who earned her Ladies European Tour card at Qualifying School last December and is making only her fifth start in the pro ranks in Cape Town.

“I only missed one green so I had a lot of birdie opportunities. I had trouble reading the greens in the first round, but I read them really well today. The grain slopes away from the mountain to the sea.

“I really attacked the flags and I hit almost every approach inside 15 feet. I’m happy that I was able to make some putts. It’s the first time that I’m playing in the leading group, so I am just going to shut out what the others are doing and play my own game.” 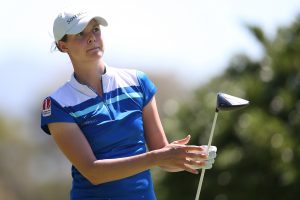 Twenty-year-old Henseleit is another exciting young talent, who turned professional with an impressive handicap of plus seven.

The German racked up birdies on two, seven, eight, 13 and 16 to put herself in contention to claim her maiden Ladies European Tour title. “I’m really happy to be where I am,” beamed the former PING Junior Solheim Cup player. “It’s only my fourth start and I can’t wait to play in the final group. I’m going to go out there and have fun.”

Defending champion Ashleigh Buhai is the next best-placed South African. The three-time winner carded a level-par 72 to finish at three-over, one shot ahead of compatriot Stacy Bregman, who returned a 74.

Meanwhile GolfRSA Elite Squad player Kajal Mistry was the only amateur to make the cut to 50 and ties, which fell at 10-over.

The Ernie Els and Fancourt Foundation member is five over after rounds of 73 and 76. Mistry is the guaranteed winner of the Jackie Mercer Trophy for the leading amateur and she could overtake Lejan Lewthwaite for second in the Investec Property Fund Order of Merit if she finishes in the top 40 after the SA Women’s Masters champion missed the cut.