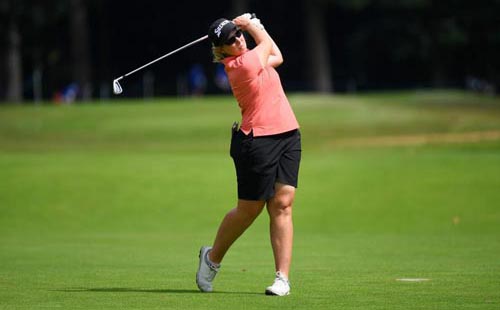 South Africa’s Ashleigh Buhai moved into a three-shot lead at the halfway point of the AIG Women’s British Open on Friday.

The Sunshine Ladies Tour champion backed up a leading seven-under-65 on day one with a flawless five-under-par round of 67, leaving her an impressive 12-under for the tournament at the Marquess’ Course at Woburn Golf and Country Club.

Buhai will go out in the final pairing with Hinako Shibuno from Japan on Saturday, who carded a 69 to finish in second. American Lizette Salas a further shot behind.

With Buhai playing in the afternoon field, Shibuno made an early move to set the club-house target at eight under.

An early birdie drew Buhai level with Shibuno, but after eight pars on the back nine, the Japanese holed a big putt at the 16th to get back in front.

Buhai was not daunted and saved her best for the final nine holes.

A birdie at the 11th put her back on terms with Shibuno and from there, she kicked on and made the most of the ideal conditions late in the day. On 13, Buhai made an excellent putt from off the fringe of the green, starting a run of three birdies in four holes.

“My goal going out today was to get to double figures,” said the three-time Ladies European Tour winner. “Once I got it to eight…nine…10-under, I felt more comfortable and was able to put my foot down.

“I managed to hit it really close on the 15th hole to like a tap-in birdie, and had a good shot into 16, tucked pin and then holed the putt. I was really steady on the front nine. I didn’t hit many shots close. I birdied my second hole with a good wedge, and hit a few good putts. I

“I’m trying not to keep thinking it’s a Major; it’s just another tournament. I’m really enjoying the way the golf course is playing. I think it helps that the conditions have just been so good and we haven’t had to deal with too many elements.”

The South African has put daylight between herself and her rivals and if she performs to the same standards over the weekend, it’s tough to see how anyone will stop Buhai from clinching her maiden major title.

However, there are a number of quality players within striking distance.

Ko Jin-young from South Korea – winner of the last week’s Evian Championship and ANA Inspiration champion – is targeting her third major title this year. The world number one is on six-under and just five off the pace alongside defending champion Georgia Hall, among others.