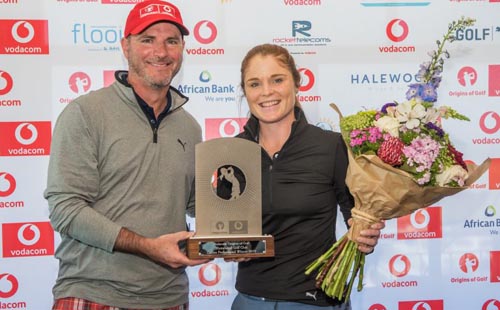 Western Province rookie Tara Griebenow bagged her maiden title in the second event on the Vodacom Origins of Golf Series at a windswept Humewood on Wednesday.

With the rain beating down on the links layout, the overnight leader beat the field to lift her first trophy with a three-shot victory. Griebenow managed the difficult conditions in the opening round better than her rivals to card four-over 76 and headed into the final round two shots ahead of Brittney-Fay Berger from KwaZulu-Natal and four clear of Ekurhuleni’s Casandra Hall.

“I was a little surprised to discover that I was leading after the first round, but I knew with the rain yesterday morning that anything could happen. Today I just focused on my own game,” said the 23-year-old, who closed with a round of 77 to triump on nine-over-par 153.

The women’s tournament was played concurrently with the 36-hole Vodacom Origins of Golf pro-am event and saw six women join the 36-strong professional men and amateur field for two days of great golf. 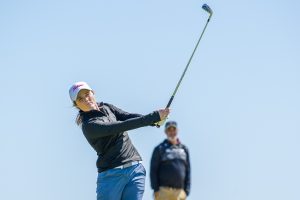 “This is such a great initiative and I am really grateful to Vodacom for the opportunity to compete here this week,” said Griebenow, who grew up in Port Elizabeth, but moved to Cape Town to complete her PGA Teaching Diploma.

“The Sunshine Ladies Tour ended in March and being able to play the Vodacom Origins of Golf is fantastic, because it gives us an opportunity to play competitively here at home, without having to travel to Europe.”

Berger loved the competitive nature of the event.

“The conditions in the first round were really tough, but it was tough for everybody,” said the Kloof Country Club golfer. “A couple of putts didn’t dropped and I hit a few wayward shots and I made a few big numbers.

“The weather was much better this morning and I tried to make up ground on the women ahead of me. I found the front nine tougher than the back, but I’m not sure if it’s more sheltered or if there was just less wind by the time we turned.

“I had to keep reminding myself that we were playing in a tournament. Although it was competitive, the atmosphere was nice and relaxed and the guys were so chilled. The only pressure was the pressure I put on myself.”