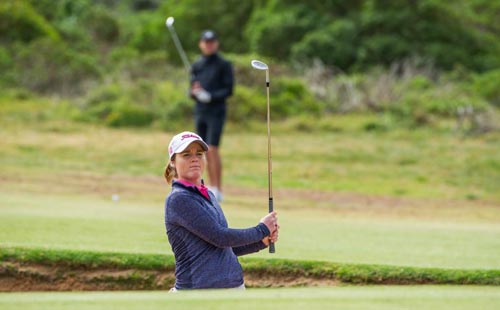 Western Province rookie Tara Griebenow leads the women’s event in the Vodacom Origins of Golf at Humewood Golf Club in just her second start on the Sunshine Ladies Tour circuit.

The 23-year-old from the Durbanville Golf Club carded a four-over-par 76 in challenging, wet and blustery, conditions on Tuesday.

“I’m a little surprised, but given the conditions I knew anything could happen this morning,” Griebenow reflected. “The rain made things really difficult initially, but I managed to fire three birdies to recover from a double bogey start on the first. That got the momentum going and it got easier once the sun came out.”

Griebenow only received her PGA South Africa professional licence at the beginning of September, so leading from the front in professional tournament is brand new territory and with the infamous Port Elizabeth wind expected to show up in the afternoon, her two-shot lead is anything but secure.

“Holding the overnight lead is one thing, but I’ll have to hang on tomorrow,” she said.

The women’s event is being played in conjunction with the pro-am tournament and the Vodacom Origins of Golf players will tee off at 8am.