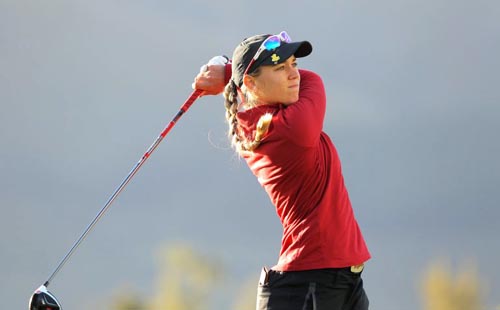 As a number of Sunshine Ladies Tour professionals take advantage of the opportunity given by the Sunshine Tour to compete alongside the men in the Vodacom Origins of Golf series, it’s reaffirmed the belief that this new generation in South African women’s golf is ready to make their mark.

Cara Gorlei certainly thinks so, and is hoping to be one of them as she embarks on her professional career.

The former star of South African women’s amateur golf has just returned from a golf scholarship at the University of Arkansas, and is more motivated than ever to be part of a new generation of golfers hoping to fly the South African flag on the tours of the world.

“I think the women’s golf talent in South Africa has come through in stages. Recently we had Ashleigh Buhai and Lee-Anne Pace and that group of players. We’ve had a bit of a lull and age gap now. But hopefully we can start a new era of good players representing South Africa on Tour,” said Gorlei.

She has only just returned from competing in the South African Women’s Inter-Provincial, where she helped Western Province to a runner-up finish at the Riviera on Vaal Country Club, and will not be participating in this week’s Vodacom Origins of Golf in Stellenbosch.

But while practising at Stellenbosch Golf Club, she was keenly aware of the opportunity the Vodacom Origins of Golf series gives her generation of golfers.

The five-tournament Vodacom Origins of Golf series has thrown its considerable support by South African women’s golf by inviting Sunshine Tour Ladies professionals to participate in each of the 36-hole pro-ams on the series.

These golfers have the double incentive of competing with their pro-am team for the betterball prize money on offer, as well as in their own internal competition with exclusive prize money for them.

And most importantly, it gives them competitive playing time before the Sunshine Ladies Tour resumes in January.

“It’s great and I would have loved to play in this series. I’ve just played my last amateur tournament, so my plans are now to practice as much as I can and then start my pro career on the Sunshine Ladies Tour in January.”

Gorlei recently made an attempt at an LPGA Tour card. She made it through the first cut in the First Stage of the Qualifying School, but then shot 79 in the final round to miss progressing to the Second Stage.

“I was the only South African to make the first cut. My game is in good shape and I know if I try again I’ll make it. In my time in America I learnt a lot about playing other tours. I learnt to trust the belief other people have in me. Once I was over there and started doing well, I kind of surprised myself. It boosted my confidence a lot. I learnt that if you just put in the hard work, I’ll definitely make it.

“My coach at the University of Arkansas, Shauna Taylor, played a lot on Tour and she has been telling me to just believe in myself and I will win out there. On the college golf scene you play against the top amateurs in the world on some of the top courses in the world. You have the best coaches and facilities, and you just learn so much. I feel if I didn’t do that I wouldn’t be so confident to go onto the Tour right now.”