Is Dlamini the player to beat in Cape Town? 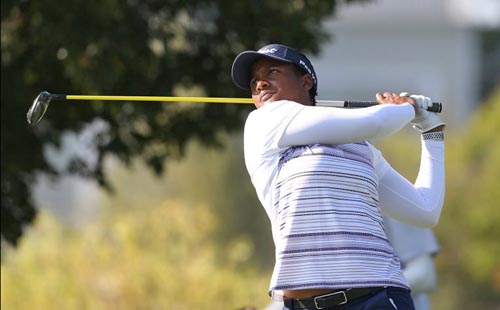 In-form Nobuhle Dlamini will be bidding for a second Investec Order of Merit title when she launches her 2020 Sunshine Ladies Tour season in the Cape Town Ladies Open this week.

The R200 000 season-opener, hosted by the City of Cape Town for a sixth successive year, will be contested at King David Mowbray Golf Club from 29-31 January.

Coming off a superb showing in the Ladies European Tour Qualifying School in Spain, few would bet against the big-hitting eSwatini golfer starting her seventh season in the pro ranks on a winning note.

As an amateur, Dlamini was a dominant force, but she struggled to transition to the pro ranks.

The pedigree was there, though. She racked up 16 top 10 finishes over the first three years and finally broke her professional duck at the Sun SuperSport Ladies Challenge in 2018.

The self-belief that took her to number two in the amateur world rankings came flooding back and a wave of confidence propelled Dlamini to the top of the standings in 2019.

She won the Dimension Data Ladies Pro-Am and Joburg Ladies Open, had runner-up finishes in the Jabra Ladies Classic and SuperSport Ladies Challenge and confirmed her dominance with further success in the Investec Royal Swazi Ladies and victory in the Vodacom Origins of Golf Ladies Final.

Dlamini said the key to her overnight success was simple. She didn’t try so hard.

“I’ve been hitting the ball for a very long time and I was just waiting for a break, but I was also trying to force things all the time. I just decided to stop forcing it. I focused on letting the winning come through the process. As a result, I was much more relaxed and the trophies started piling up,” Dlamini said at the end of the 2019 season.

“My mistake when I turned pro was that I tried to change and get my game perfect. But you are not perfect. My advice to any amateur out there would be to not try to change too much. As an amateur, you get to where you are because it works, so don’t change when you turn pro.”

That self-belief – illustrated most emphatically at Fancourt, where she drained a 25-footer at the final hole in the last round with authority to win the Dimension Data Ladies Pro-Am – was on display once again in Spain.

Dlamini took her blistering form to Europe, but playing on a limited card proved frustrating. She struggled to build momentum with sporadic starts and weeks off between events and narrowly missed the top 80 cut-off at the end of the 2019 on the Ladies European Tour (LET) season.

Forced to make a return trip to Q-School this January, she landed a top 10 spot with an opening round of 71 on the South Course at the Real Golf La Manga Club and kept her foot on the pedal throughout the gruelling 90-hole test to clinch her card for 2020 with a top eight finish.

With her future in Europe secure, Dlamini has set some lofty goals for 2020 Sunshine Ladies Tour – a second Investec Order of Merit title and the ultimate prize: in the season-finale Investec South African Women’s Open at West Lake Golf Club in March.

After a week of challenging weather conditions in Spain, the infamous Cape Town South Easter could further strengthen her chances.

Dlamini won the SA Women’s Amateur Championship in a windy 36-hole final at Royal Cape in 2009. She went wire-to-wire at Umhlali Country Club in even more blustery conditions to lift the 2012 SA Women’s Stroke Play title. She braved gale force conditions at the Wild Coast Sun for her maiden success on the Sunshine Ladies Tour. And gusty conditions put a premium on her skills in the wind during both of her victory marches on the Vodacom Origins of Golf Tour last year.

“You have to play the holes into the wind well. On the other holes, if it comes off the side or from behind, you can use it to your advantage. King David Mowbray is a tight course and heavily tree-lined. The greens usually roll true and have a nice speed. You just have to keep the ball in play. The course isn’t that long and if you are hitting it well, you can score. The key this week to winning is fairways, greens and a hot putter.”

To get the first win in the bag though, Dlamini will have to stave off some stiff competition all seeking a winning start in the City of Cape Town.