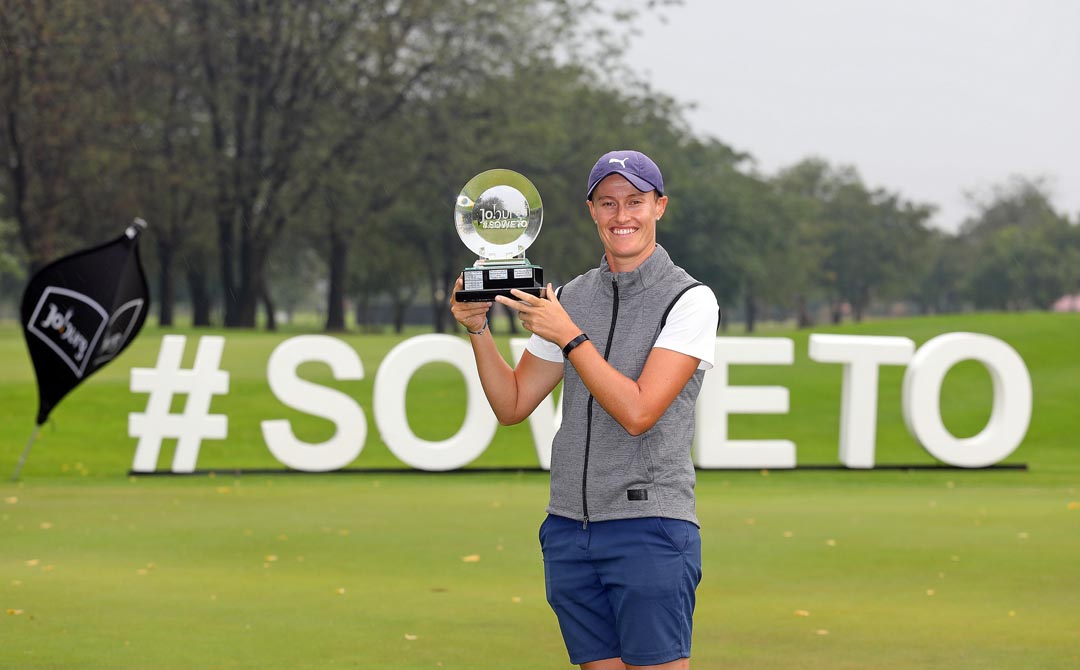 Monique Smit claimed an emotional fourth Sunshine Ladies Tour title at the R500 000 Joburg Ladies Open, where she tapped in for par at the final hole to emerge from an enthralling finale with a one-shot victory.

Almost exactly a month ago, the South African won a four-way play-off to clinch the 20th and final card on offer for the 2020 Ladies European Tour season at the final stage of the LET Qualifying School in Spain.

The 28-year-old George golfer brought that same big match temperament to Soweto Country Club on the final day to edge out overnight leader Sideri Vanova with a two-under-par 70 to triumph on one-under 217.

Vanova from the Czech Republic started the day with a seven shot advantage, but the Oubaai golfer started to close the gap in impressive fashion with birdies at the second and third holes.

“I hit a solid 8-iron straight at the pin, four feet short of the hole and boxed the putt for birdie,” said Smit. “On third, I managed to get it on for two. It should have dropped for eagle, but just slipped past and I had a tap-in birdie.”

Smit bounced back from a double bogey on the fourth with another gain on the par four fifth and countered a drop on the eight with a birdie on nine to turn one-under.

“The fourth was just an oops on the scorecard. On five, I took a lesser club and hit it hard and I got a favourable kick on to the upper tier of the green and holed a beautiful 15-footer for birdie. And I made another solid birdie on nine to keep the momentum going.”

Vanova – chasing a career first victory in her debut on the South African women’s professional golf circuit – aided Smit’s challenge when she dropped five shots on the outward loop. 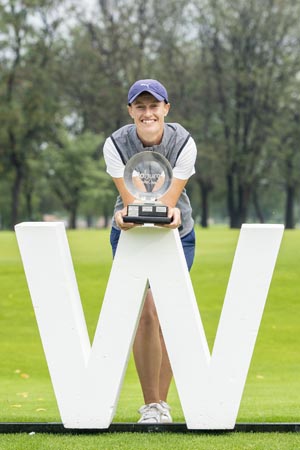 With her lead cut to just one shot, the Czech golfer started the back nine with five straight pars, but Smit matched her shot for shot, including answering Vanova’s birdie on the par four 15th with one of her own.

“The birdie on 15 was a super lucky one. I hit a good 3-wood down the fairway and I took a three-quarter wedge into the green because we had a bit if wind from behind. I started it out a fraction to the right and I got such a good member’s bounce. It stopped five feet from the pin, and I knocked it in to stay one shot behind Sideri.”

Both players had just hit their second shots into the 16th when play was suspended for dangerous conditions.

A heavy 60-minute downpour during the nearly three hour suspension had left the firm greens a little more receptive, but the already penalising rough absolutely brutal. Smit made a superb par from the back of the green, while Vanova failed to capitalise on a 12 footer for birdie on 16.

“Sideri took on the pin on 17 (par three). She overshot the green and caught a bad bounce that left her in the trees. She dropped another shot and I made a good par to level the score,” Smit said.

On 18, the 30-year-old Czech paid the price of an errant drive when she leaked her tee shot left into the rough. Smit’s percentage golf earned her a share of the lead on the penultimate hole and a cautious 3-wood off the tee on the final hole set her up for the win.

“The rough had been so punishing on a dry day, but with the rain it was like chewing gum. Sideri hit her second shot with absolutely everything she had, but she only advanced it a few metres. She hit a magnificent third out of the rough, though and was about 15 feet short right of the pin,” Smit explained.

“I was well behind her with the 3-wood off the tee and had the advantage of going first. I just wanted to find the putting surface when I saw her in the rough. I lagged my first putt to half a foot and she nearly holed her putt. Unfortunately it pulled up short and I had the par putt for the win.” 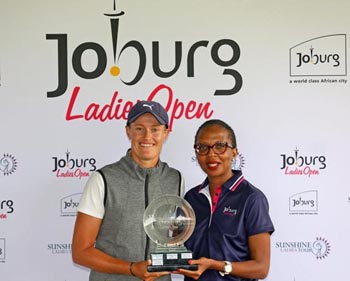 Smit was visibly emotional in a post-round interview and dedicated the victory to her mom Rejeanne, who passed away last year. “Mom was always on the bag over six seasons on the Sunshine Ladies Tour. She was on the bag for my first win in the Dimension Data Ladies Pro-Am in 2014 and she shared in all my great moments and the not-so-great ones,” said the 28-year-old.

“She was my best friend and my biggest supporter and the hardest thing I ever had to do was to lay my mom to rest. To come into the final day with a seven-shot deficit was nothing compared to that. I could hear her tell me just give an extra 10% and I did that today.

“I tried to win the Joburg Ladies Open for four years, and finally Bongi Mokaba from the City of Joburg has given me the trophy. I am so proud of the way I achieved it. Soweto Country Club demands respect and rewards it, and that is what I did for 54 holes. I stayed true to my game plan to hit fairways and greens and to show the course respect. I’m absolutely over the moon with this result.

I am so proud of the way I achieved it. Soweto Country Club demands respect and rewards it, and that is what I did for 54 holes. I stayed true to my game plan to hit fairways and greens and to show the course respect. I’m absolutely over the moon with this result.

“I want to congratulate Sideri on a wonder start to her season. Her smile never wavered, no matter what happened out there and she is a wonderful ambassador for the game, a great example to other pros and a fantastic role model for the youth. I’m sure we will be seeing more of her in the next two weeks.”

Vanova closed with a round of 78 to seal a runner-up finish, while Stacy Bregman took third on six-over with her final round 73. Fourteen-year-old Stephanie Barbaglia won the leading amateur prize. The Bryanston golfer carded rounds of 73, 79 and 76 to tie for seventh.

The Sunshine Ladies Tour travels to Glendower Golf Club next week for the R600 000 Jabra Ladies Classic, where the international field will fight it out for the winner’s share and a spot in the Jabra Ladies Open on the Ladies European Tour from 4-6 March.

This is the penultimate event before the season wraps up with Investec SA Women’s Open at Westlake Golf Club from 12-14 March.

END_OF_DOCUMENT_TOKEN_TO_BE_REPLACED

Buhai and company ready to blast at Glendower