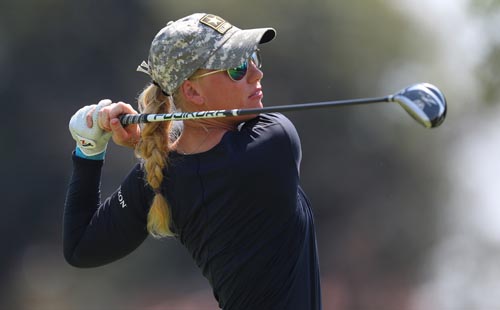 SOWETO – Sideri Vanova took one huge step towards a maiden Sunshine Ladies Tour title after the Czech opened up a commanding lead heading into the final round of the Joburg Ladies Open in Soweto.

Vanova threatened to run away with the title during the first 12 holes of the second round, carding birdies on the second and fifth holes and racking up three more after the turn at Soweto Country Club.

However, four bogeys on the bounce from the par four 13th pegged her back and she moved to a four-under total after solid pars saw her closing with a one-under 71.

No-one in the closing pack jumped at the chance to close gap, although Monique Smit managed to cling to second place. The Oubaai golfer will start the final round a yawning seven-shots off the pace on three-over, after mixing a lone birdie with five birdies for a 76.

Indian’s Sharmila Nicollet, Stacy Bregman, Investec Order of Merit leader Lejan Lewthwaite and rookie Tara Griebenow were all a shot further back on five over.

The second round belonged to one woman only and Vanova was thrilled to start her season with such a strong performance in the R500 000 showpiece in Soweto.
“It’s definitely not what I expected; to be leading in my first start is a huge surprise,” said the Dubai-based golfer.

“I’m really pleased to be in such a strong position, because I put a lot of hard work in with my coach in the off-season. We changed my swing, my short-game, my putting…we basically changed everything and I was nervous to see how the changes would hold up. It will be good to see if I can keep it going for one more round.”

Vanova’s was the only sub-par round on the second day and she was philosophical about the four shots she squandered on the homeward loop.

“Today was an up and down round,” she said. “I started off really well, but it got really tough on the back nine. The greens were very firm. I found them much harder today than in the first round and it was difficult to control your approach shots.

“On 13, I pitched it just short of the green after a perfect drive. The ball took one bounce onto the green and another bounce and shot off the back and I couldn’t up-and-down. On 14 I was a bit more cautious with the approach and ended up three-putting from 50 metres.
“I had two bad breaks and I made two mistakes. These things happen in this game, but it broke my flow and it took me a while to get it back. I was happy to finish with two good pars. I’m pretty happy with where I’m at right now.

“The course was really tricky, because if you miss the fairway you are in deep grass and you battle to save par. When you add the firm greens, I am not surprised at the scoring.”

Vanova has barely missed a fairway in 36 holes and her on-song short-game has served up nine birdies in two sub-par rounds. Behind her, her challengers have been paying the price of errant tee shots and pin-seeking approaches.

“I drove it really well, but one or two iron shots got away from me. But it felt like a different golf course out there, because the greens were way firmer than in the first round,” said Smit. “We were able to stop the ball on the greens on day one, but today we struggled and you had to watch your pace on the putts not to rush them five to 10 feet past.”

Bontan was one of the few campaigners who improved on day two and the former Dutch National champion said better driving helped her to shave four shots off an opening 76.

“I put myself in much positions off the tee and gave myself opportunities to get on the green. I did have two bogeys, but I got it back to level with birdies on four and 10 and made some solid pars the rest of the way.”

The 22-year-old Woudenberg golfer described the Gary Player-layout as a really good test. “You need to be accurate off the tees, you must have a solid short game and a hot putter.

“It’s a really fantastic layout and in really good condition, and I love that I got to play my first Sunshine Ladies Tour event here. This is a great way for me to ease into my pro career and to build some form for the LET Assess Series, which starts in April.”

PHOTO: Sideri Vanova from the Czech Republic is 18 holes away from a maiden Sunshine Ladies Tour title after opening up a 7-stroke lead in the second round of the R500 000 Joburg Ladies Open at Soweto Country Club.

Credit Sunshine Ladies Tour. These images are FREE FOR USE with editorial.

END_OF_DOCUMENT_TOKEN_TO_BE_REPLACED

Vanova delighted to lead the way in Soweto