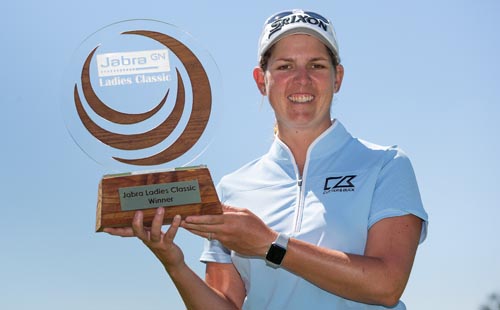 The only player in the 77-strong international field to break the 200 mark, Buhai celebrated her 11th Sunshine Ladies Tour title – and 14th career win – with a winning total of 17-under-par 199.

The 30-year-old honorary member opened her campaign at the championship layout with a blistering 63 and retained the overnight lead with a 69 in the second round. She began the final day three shots clear of Stacy Bregman and four ahead of local fan favourite Casandra Hall.

Birdies at the first and third holes kept Bregman at bay and a third gain on the par four ninth took Buhai through the turn with a four-shot cushion.

Bregman managed to close the gap with back-to-back birdies on 11 and 12 and a Buhai bogey on the par five 13th reduced the deficit to two shots, but Buhai extinguished Bregman’s title hopes with a brilliant approach into par five 15th. After holing a confident 15-foot putt for three, she drained a 20-footer on the short 17th and closed out a five-shot victory with par at the last.

“Obviously I’m thrilled with the golf I played over the last three days; to shoot 17-under in three rounds is pretty to good golf, even if I say so myself,” said the delighted Buhai after her final round five-under 67.

“Coming home after a top 13 on the LPGA Tour in Australia and then playing the kind of golf I did here shows that the work I’ve been doing with my coach Doug Wood is really paying off.

“I knew going into the final round that Stacy and Casandra were going to come at me. Although we had sunny weather the last two days, the course was still soft and you could fire at the pins.

“The way I am swinging it, I just trusted what I was doing. They had to catch me. If I make a few birdies, they would have to make two or three more, so I felt very comfortable going out there.”

Buhai found the water on the par-five 13th but atoned for the lone bogey with a strong finish.
“Stacy pulled it back after the turn, but I just continued to hit to the spaces I needed to. I stood on the 14th after the drop and thought if I made two birdies going home I’d be good. And I made an eagle and a birdie,” she said.

“I had 194 metres to a tucked pin on the left and I went with a 5-wood. The ball was lying perfectly, just a little above my feet. I could trust what the slope would do and drew it into the flag. It came out perfectly. On 17, the pin was also tucked on the left but the wind helped off the right. It was a similar yardage to the second round. I hit a flighted 7-iron in and it held the line beautifully.”

Buhai enjoyed sharing another victory on home soil with husband David on the bag.
“Dave and I don’t do this full-time anymore, because we want to stay married,” she joked. “No-one knows my game better and there is no-one I trust more. It’s brilliant to celebrate another win with him. We almost have a full-house now. The only one I haven’t won is the Dimension Data Ladies Pro-Am, because it doesn’t fit in with my schedule.”

Buhai also applauded Jabra for extending their investment in the women’s professional game to the Sunshine Ladies Tour.

“It’s really fantastic to see a foreign company backing golf in South Africa and to have JB (Jean-Baptiste Pain – Jabra Managing Director South EMEA) driving this is incredible, because he is so passionate about growing women’s professional golf. Not only did Jabra increase our prize money from R200 000 to R600 000 this year, but they also offered the first non-exempt player in the top five a spot in the Jabra Ladies Open on the Ladies European Tour. This event has two qualifying spots for the Evian Championship.

“The international interest from the players continues to increase, because our tour is perfectly positioned at the start of the season. I sincerely hope that JB and Jabra will inspire more foreign investors so we can grow the tour.”

Meanwhile Bregman may have had to settle for second after a final round 69, but the runner-up finish carried 620 points, which propelled her to the summit of the Investec Order of Merit. It’s an advantageous position for Bregman ahead of the final event – the Investec South African Women’s Open. The five-time Sunshine Ladies Tour winner topped the standings in 2018 and could bank the R100 000 bonus again with another strong showing at Westlake Golf Club next week.

Ladies European Tour (LET) rookie Hall was equally pleased with her performance ahead of the co-sanctioned €200 000 season-finale in Cape Town.

“It will be my first LET start and I’m taking a lot of confidence from this performance to Westlake. Hopefully the wind is merciful and I can get my foot on the Order of Merit,” the 20-year-old said.

With Buhai, Bregman and rookie Hall already exempt it was Scotland’s Jane Turner that earned the start in the Jabra Ladies Open as the first non-exempt player in the top five.

Turner, who won the Standard Bank SA Women’s Masters at San Lameer just two weeks ago, made a trio of birdies on the bounce from the 12th and a further gain at 17 to register a final round 71 that lifted her to fourth on five-under 211.

NOTE: This Sunshine Ladies Tour image is FREE FOR USE with editorial.

END_OF_DOCUMENT_TOKEN_TO_BE_REPLACED

Buhais all in for four of a kind at Westlake