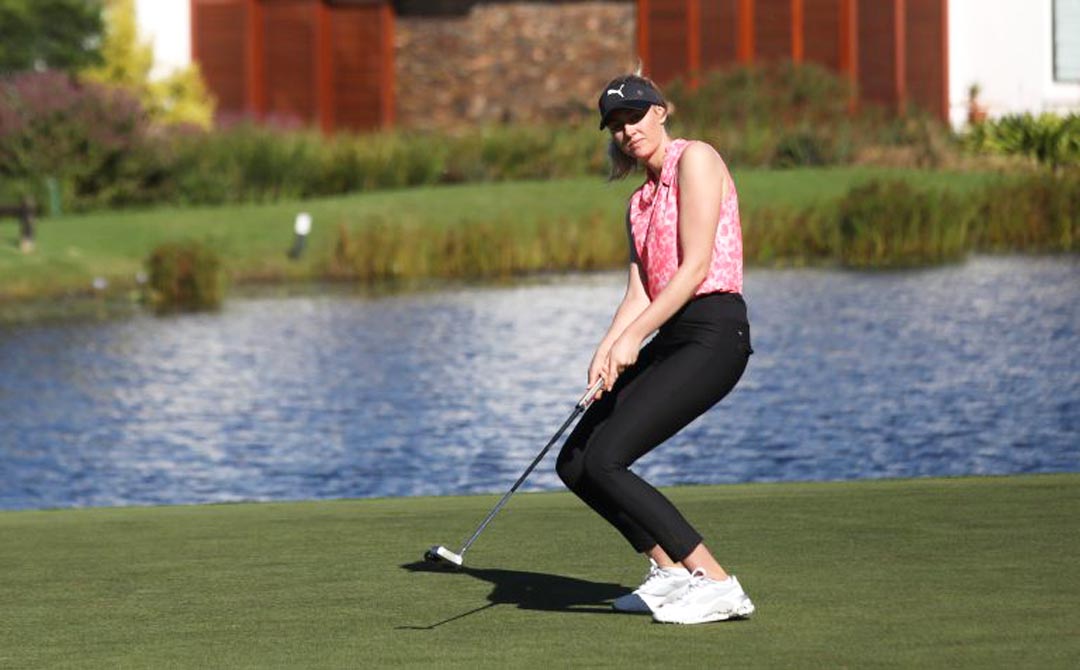 Olivia Cowan will go in search of a maiden Sunshine Ladies Tour title on the final day of the Dimension Data Ladies Challenge at Fancourt after emerging from the pack in Friday’s second round.

Cowan, who made a late call to compete in the show-stopper on the Garden Route, started her campaign with a one-over-par 73 on the Montagu Course.

Four off the pace at the start of the day, the 25-year-old German made the most of her sponsor’s invitation on the Outeniqua Course, firing a stunning nine-under-par 63 to reach eight under for the tournament.

In a flawless performance, Cowan backed up an eagle start on the par-5 11th with seven birdies, including three on the bounce coming home.

She will take the largest 36-hole lead into the final round this season, with Emie Peronnin from France, three-time champion Kim Williams and eSwatini’s Nobuhle Dlamini tied for second.

Peronnin and Williams both carded 71s on the Montagu.

Dlamini, also playing the Montagu, was four behind overnight leader Tonje Daffinrud after an opening 73 on the Outeniqua course. At the turn, the 2019 champion looked very much like the player to catch Cowan after she birdied the third and eagled two par fives – four and 10. However, the only time she broke par coming home was with a bogey on 14th and a 68 left her in the three-way tie on three-under.

Cowan was understandably pleased with the day’s result.

“That was so much fun, especially after the start I had,” Cowan said. “I holed out for eagle on the first and birdied the next hole. I turned to my caddie and said: ‘Today we’re going to go low’ and I managed to keep the momentum going.”

Cowan put some space between herself and the pack with further birdies on 14 and 18 for an outward half of 31 and increased her advantage with a trio of birdies from the fifth.

“It could have been 10 under, but my birdie on 10 lipped out,” she said. “It was a bit unexpected, if I’m honest. I didn’t strike it very well on the Montagu and I wasn’t hitting it well on the range this morning. But those first two holes really set me up and I kept it going with good iron play and putting. Yeah, it was a lot of fun out there.”

Scotland’s Kylie Henry (69) and Astrid Vayson de Pradenne from France (72) tied for fifth on two-under and the internationally-flavoured leaderboard continued, with local favourite and former winner Monique Smit the only South African in the four-way tie at one-under.

Vlasinova was one-under when play had to be suspended due to darkness. The Czech golfer, Pasqualle Coffa from the Netherlands and Lora Assad will complete the round at 07h30 on Saturday. Following the cut to 30 and ties, the final round will be played on the Montagu course.

Cowan is looking forward to another strong performance to cap the week in George.

The Ladies European Tour campaigner kicked off her 2020 season in South Africa with a tie for seventh in the Investec South African Women’s Open at Westlake. The worldwide Covid-19 pandemic put paid to her hopes of winning a maiden title last year, but Cowan is holding out hope that 2021 will be season that delivers the breakthrough.

“The 2020 season was basically a write-off, but I am positive for this year. That’s why I came out earlier to use this week as preparation for the start of the Race to Costa del Sol in Cape Town and it would be great to leave Fancourt on a winning note,” Cowan said.

“The Montagu is the tougher of the two courses for me, because it plays longer and you can’t really fire at the pins. I managed to avoid bogeys today, which always sets you up for a better score, so that will be the strategy for tomorrow – hit fairways, hit greens, make putts and eliminate mistakes.”