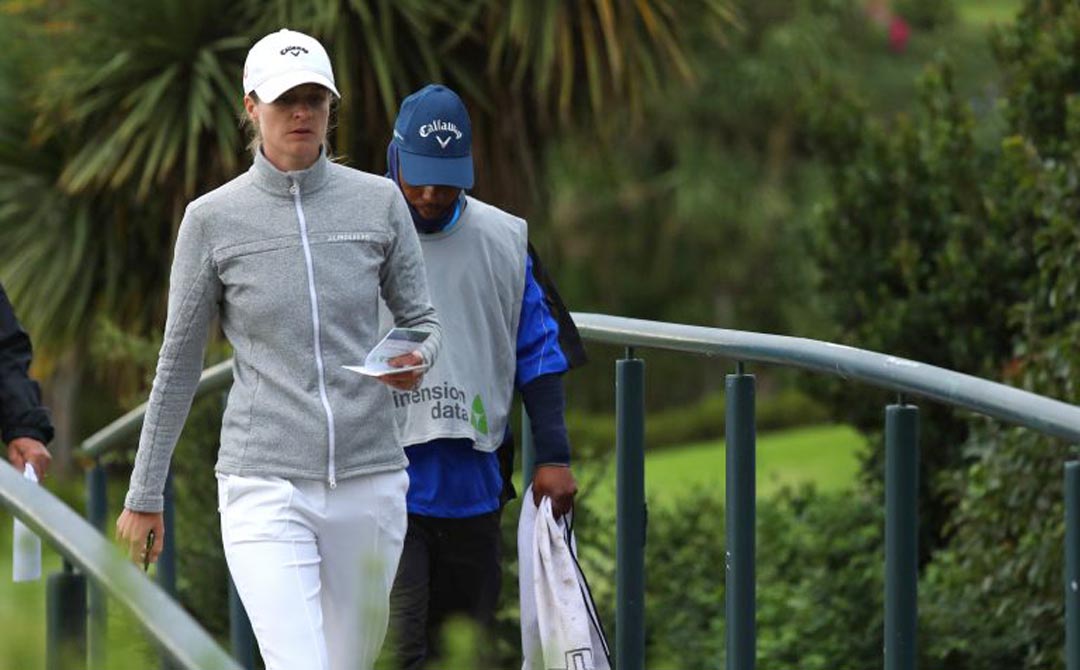 GEORGE – Norwegian Tonje Daffinrud birdied the last two holes to break away from the pack and surge to the top of a congested first round leaderboard in the Dimension Data Ladies Challenge in George on Thursday.

With the field split between two of the three courses at Fancourt over the first two rounds, Daffinrud was the surprise leader after carding a three-under-par 69 on the less than giving Montagu course.

She will carry a slender one-shot lead into her second round at the Outeniqua course, where all six players tied for second recorded two-under 70 rounds on day one.

“I didn’t actually make a lot of putts until the back nine, but my iron-game was pretty solid and I hit them close,” said the Oslo golfer. “The course was definitely softer after all the rain overnight and that helped. We only had overcast skies and occasional drizzles, so that was good, too. But it was definitely the iron game that saved me.”

Daffinrud made her debut on Africa’s premier women’s professional circuit at Soweto Country Club last week, where she tied for eighth in the Joburg Ladies Open.

“It feels pretty good to be in contention. I worked really hard during the winter and it’s my first time playing in South Africa. Fancourt is an amazing facility and I am looking forward to playing the course on Friday. I am really enjoying myself here in South Africa and my game is feeling pretty good. It’s absolutely amazing to be playing tournament golf again.” 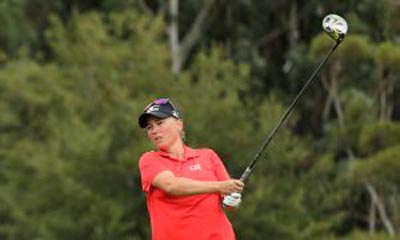 South Africa’s Kim Williams fired a two-under 70 on the Outeniqua Course at Fancourt to finish one off the pace in the first round of the Dimension Data Ladies Challenge; credit Sunshine Ladies Tour

Another afternoon starter, Kim Williams, joined Stacy Bregman as the only two South Africans in the six-way tie for second.

The three-time Sunshine Ladies Tour winner made three birdies on the bounce from the fourth and edged into the outright lead with a birdie on the eighth.

“I had two soft bogeys coming home, but I’m really happy with the round,” said Williams. “I have been striking the ball really well since the start of the season, but not scoring because the putter just stayed cold. Today it finally came to the party and it was fun out there for a change.

“It was quite a shock at the start of the round to see how differently the course played to the practice round. It had softened up quite a bit and the greens were holding. They were quite firm yesterday, but today your iron shots either sat or you got one bounce and it would spin back.

“I hit some really good irons today and the putter did the rest. Both my bogeys were soft drops, where I short-sided myself. I had no green to work with on 10 and on 14 I hit 6-iron and pulled it left on the wrong side of the green. That green has a lot of slope, so I wasn’t too upset with the outcome.

“I may have to take my putter to bed tonight to keep it warm for the Montagu, because that’s a much tougher test. The greens have way more slope and positioning is key to scoring on that side. But it feels really great to shoot a competitive score again, and that before we head to Cape Town next week for the Investec South African Women’s Open.”

Bregman, who lifted the title in 2015, offset a lone bogey with three gains to square up with Williams, French pair Emie Peronnin and Astrid Vayson de Pradenne, and Dutch golfer Romy Meekers.

Last year’s Investec Order of Merit winner Monique Smit also made a strong start as she pursues a first win this season, and a second victory in the Dimension Data Challenge. The popular Oubaai golfer carded 71 on the Montagu to tie for third on one-under with Tandi McCallum and the Czech Republic’s Katerina Vlasinova, who both played Outeniqua.