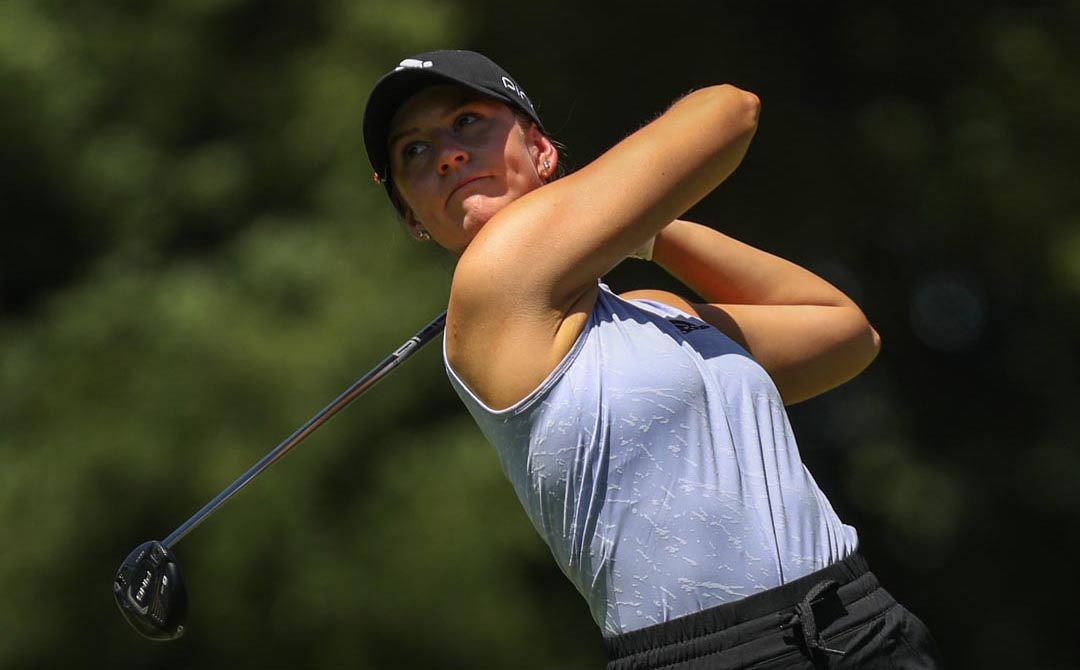 GEORGE – Sweden’s Linn Grant fired a bogey-free five-under-par 67 on Saturday to move to the top of the leaderboard of the Sunshine Ladies Tour’s Dimension Data Ladies Challenge at George Golf Club.

She started her round on the back nine, and she couldn’t have got off to a better start as she made five birdies in a row. It was pars for the rest of the way, but, with a start like that, and only one other player coming close to that kind of score.

It was enough to give her a four-stroke lead over Namibia’s Bonita Bredenhann, Michelle Forsland of Norway and South Africa’s Cara Gorlei.

“I started off really well,” said Grant, without any sense of irony. “I was kind of in a flow for the first five holes when I hit it close and holed some putts. And then I really started to think. I asked my caddie what his lowest round as a caddie had been. He said seven-under, and I said my was 11-under. So I said let’s do 12-under. That was the worst thing to do. But from there I played solid golf. I just didn’t hole any putts and I didn’t get close enough.”

The course is growing on her, just as she has to leave with the rest of the players who made the cut, as the final round of the 54-hole event will be played on Outeniqua at Fancourt.

“The course here has got a little tougher each day since the practice round,” said the 21-year-old Helsingborg golfer, who makes her Sunshine Ladies Tour debut this week. “The pins made it tougher all the time. But I like it – it’s a very strategic course.”

Gorlei carded a one-under-par 71, one of only four rounds under par for the day, to be the leading South African.

Like Grant, she found the first nine tougher than the homeward nine. She started her round on the first, and two birdie and three bogeys to turn in one-over 37. But she came home in two-under 34 with two birdies and no dropped shots.

“It was a bit of a slow start today,” said Gorlei. “I struggled with a lot of the putts today. I put it close on a couple of holes coming in but I just couldn’t make a putt. It was tough out there, a long round, but I’m happy with my position.”

She’s looking forward to the final round on Outeniqua. “I love the course,” she said. “I’ve always done well there. It’s in really good condition, so I’m excited to go out there and just have some fun.”

One shot behind Gorlei and the others, on level-par, are first-round leader Moa Folke of Sweden and South African Ivanna Samu.

Two amateurs survived the 36-hole cut to the leading 30 players and will be heading to Fancourt for the final round. Carey Dodd improved on her opening 82 with a second 77 to tie for 28th on 15-over, and Eleonora Galletti made it on the button, a further stroke back in joint 30th.

END_OF_DOCUMENT_TOKEN_TO_BE_REPLACED

Folke forges to the front in George