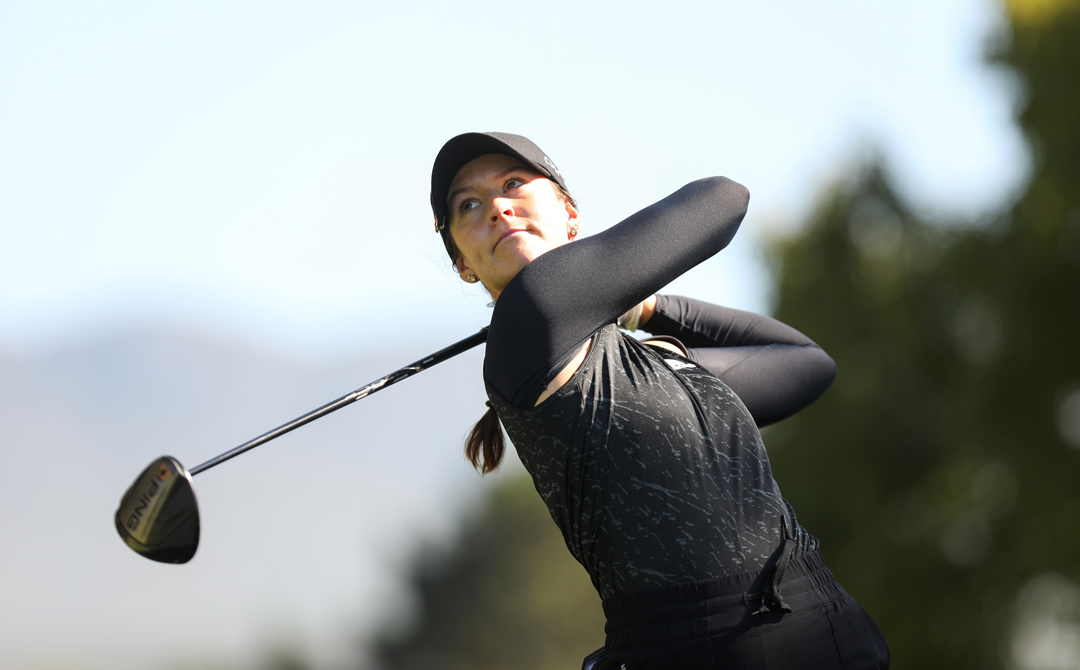 12 Febuary 2022 Linn Grant during round 2 of the Dimension Data Pro-Am 2022, at the Gorge Golf Club.Lindi Coetzee

DOWERGLEN – Sweden’s Linn Grant carded a three-under-par 69 on Wednesday at Glendower Golf to take a one-stroke lead after the first round of the Sunshine Ladies Tour’s Jabra Ladies Classic.

On a day when there were plenty of bogeys on plenty of scorecards, Grant’s single bogey was an impressive feat, and, combined with four birdies, it gave her the lead over reigning Investec South African Women’s Open champion Lee-Anne Pace.

Pace had two bogeys on her card, and she, in turn, finished one clear of England’s Florentyna Parker, last week’s champion Paula Reto and Cara Gorlei.

Grant signalled a warning to the field when she fired a round of 62 in the pro-am on Tuesday, but the 21-year-old from Helsingborg made some adjustments in the opening round.

“I knew from yesterday’s pro-am that you could end up chasing it too much, so I just tried to keep my cool and make the birdies as they came to me,” said Grant, who won the Dimension Data Ladies Challenge two weeks ago. “I just did things as usual, played my game.

“It was a solid round. I think I missed two fairways, and just one or two greens. I was not as close to the pins as I was in the pro-am, but I took the chances that I got and I made the birdies that I could. I reached some of the par-fives, and just kind of hung in there.”

Pace started her round on the 10th and pulled herself back into contention after her bogeys on the third and fifth threatened to derail her round.

Birdies on six and eight got her back on track. She played with LPGA Tour campaigner Reto, who started with two birdies and dropped no shots on her opening nine. The par-three sixth, however, saw her give up a shot for her only drop of the day.

Parker, however, was not as fortunate as Pace and Reto. She was on course to hold the first-round lead until a double-bogey six on the 18th saw her slip two shots off the pace.

Further back, in a share of sixth place, Casandra Alexander spent most of her round fighting off the shock of a double-bogey six on her opening hole, the 10th. She birdied the 11th but dropped two more shots ahead of the turn on 12 and 14. She slipped even further back with another dropped shot on the fourth, but she showed the value of hanging in there as she finished with a flourish with two birdies and an eagle in her final five holes.

In-form Floyd could be one to watch over the next two days as she makes her first Sunshine Ladies Tour appearance at the course where she won the Ekurhuleni Women’s Open and Junior Open titles in October last year.

The GolfRSA No 2 played in the leading group in the inaugural event three years ago and placed an impressive third behind winner Anne-Lise Caudal and runner-up Nobuhle Dlamini. In the past two weeks she lifted the South African Women’s Stroke Play Championship title and won the Gauteng North Junior Open.

For Grant, it’s just playing what she sees in front of her. “It’s just day one, so anything can happen,” she said. “Lee-Anne and the others are just one behind, and that’s a bogey on the first hole and then they’re even.

“I’ve been working on some stuff, and, although it’s only the beginning of the year, to get a win like I did in George boosts your confidence. Just to know in my pre-season that what I’m doing is working is a nice feeling.”