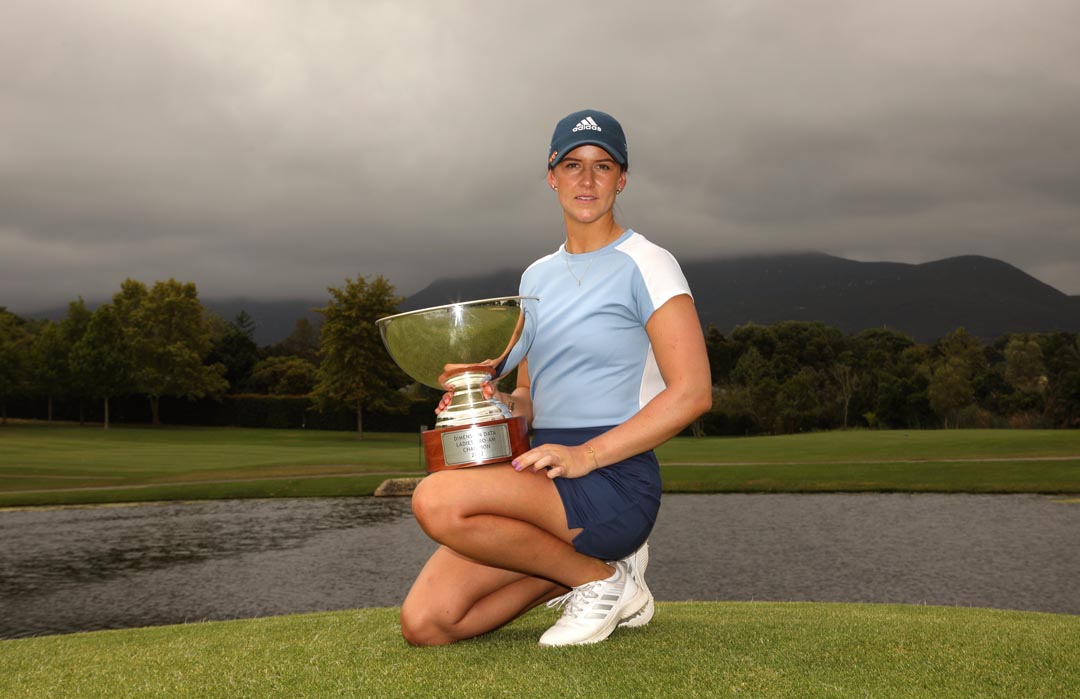 13 Febuary 2022 Linn Grant during round 3 of the Dimension Data Pro-Am 2022, on the Montague course at Fancourt, George.

GEORGE – In the end, five-under-par 67 on Sunday was more than enough for Linn Grant of Sweden to carve out a seven-stroke maiden victory in the Sunshine Ladies Tour’s Dimension Data Ladies Challenge in the final round on Outeniqua at Fancourt.

It was her second successive 67, and she needed it as 2017 champion Nicole Garcia stormed home with an eight-under-par 64 to move into sole second place.

But, in the end, a pair of five-under-par 67s will always win a tournament over a weekend, and Garcia finished seven shots off the pace in second place.

“I was just playing my own game and not thinking,” said Grant. “I saw a couple of times that I was doing fine, so I just relaxed and had a really good day.”

It was a bogey-free effort from Grant after a steady start of one birdie on the second hole with the rest of the opening nine all pars. She turned on the charm on the homeward nine, with birdies on the 10th, 11th, 14th, and 17th taking her home.

It was the birdie on the tough par-five 11th that got her heading safely for home.

“They’d moved the tee forward on the 11th,” she said, “and I said to my caddie I was going to take driver. He wasn’t sure, but it meant I had a four-iron in. I hit it under a tree and didn’t get relief unfortunately. I hit a pretty good chip and then managed to roll the putt in.

“My game was really good and solid. I got some putts rolling again today and it was fun. With the final round on Outeniqua, you just know that the greens are good, and the putts are going to roll where you hit them.”

For Garcia, it was perhaps a case of too little too late, but she will take the closing six-under-par 30 any day.

After starting with a bogey, she turned in two-under 34, and the opened the scoring floodgates. Birdies on 11, 13, 14 and 15, but that run was interrupted by a bogey on 16. She made up for that slip with an eagle on the 17th and a closing birdie to race home in six-under 30.

Behind her, Bonita Bredenhann of Namibia finished third on two-under after a closing 71, with South Africa’s Ivanna Samu in fourth on one-under. In a share of fifth were Jane Turner of Scotland, South Africa’s Cara Gorlei and Norwegian Michelle Forsland.

It turned into a doubly profitable week for the Swede.

Having won the lion’s share of the R600 000 purse in the professional tournament, the Swede also pocketed the R30 000 first prize cheque in the Betterball Pro-Am Competition, after she and amateur partner Colleen Anderson combined for rounds of 67, 66 and 63 to post a winning score of 20-under-par 196.

For the winner, the satisfaction was particularly sweet.

“It’s my first tournament of the season,” she said. “I’ve been at home practicing indoors in the European winter, and to come out and feel that some of the things I worked on are there is a good start. I’ll play the next two events to continue preparing for the two events co-sanctioned with the Ladies European Tour – the Joburg Ladies Open and Investec South African Women’s Open – in March.”

Garcia and partner Vanessa Jackson finished in second, three shots back, and a final round 68 from Tandi McCallum boosted the former SA Women’s Open and partner Ethel Nyembe to third on 15-under.

The two amateurs who made it to the final day at the Outeniqua Course, Eleonora Galletti and Carey Dodds, finished 29th and 30th respectively.

PHOTO: Sweden’s Linn Grant claimed her maiden professional title in the Sunshine Ladies Tour’s Dimension Data Ladies Challenge with a final round five-under 67 at the Outeniqua Course at Fancourt.