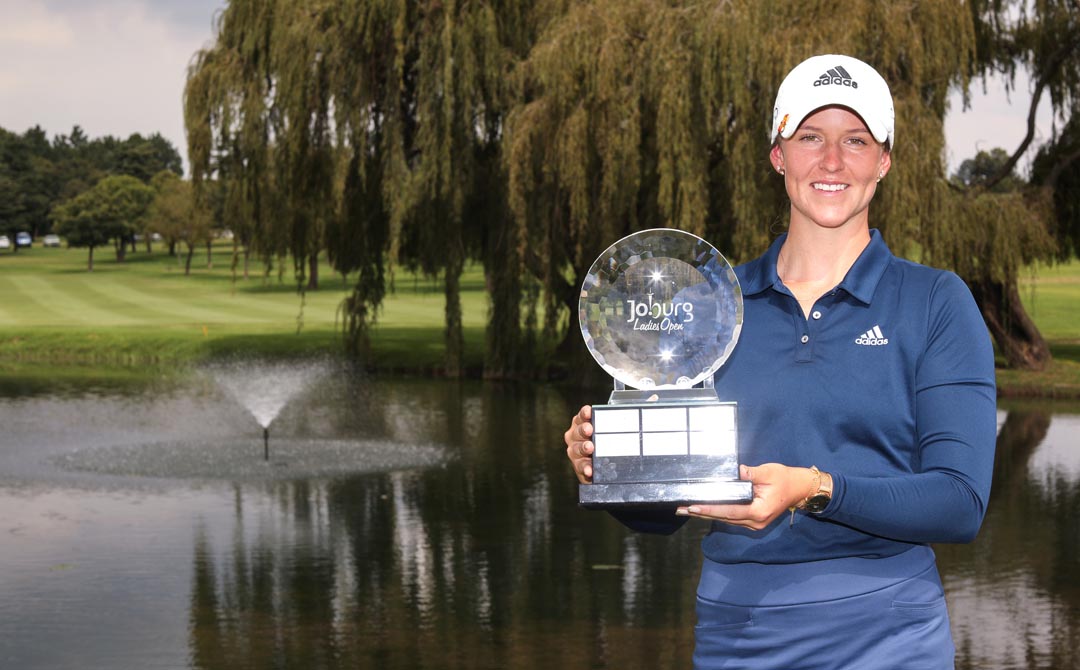 JOHANNESBURG – It was a dream start to life on the Ladies European Tour (LET) for Linn Grant, as the Swedish star claimed a five-shot victory at the Joburg Ladies Open in her first start as a full member.

And she completed her South African hat-trick in style on Saturday, with the rest of the field having no answer for her incredible final round at Modderfontein Golf Club.

The 22-year-old from Helsingborg shared the lead with Spain’s Maria Hernandez on five-under at the 36-hole mark, but she was a cut above the rest over the last 18 holes, firing a six-under-par 67 to triumph on 11-under 208.

“It’s always nice to get a win; it feels amazing,” said the smiling Grant. “It was great to come to the Sunshine Ladies Tour before the LET season began to make the most of the good weather and get some practice in.

“I still feel like there’s some scary holes here, especially coming in on the back nine. You have to keep your shots together and there’s a couple of holes you have to look out for on the front nine as well, so I tried not to do anything stupid really.”

The 2017 Ping Junior Solheim Cup star showed no signs of nerves as she registered birdies on the first and second holes to create an early gap ahead of the chasing pack, before picking up another shot on the fifth to carve open a sizeable gap.

She immediately negated a bogey on the sixth with birdies on seven and eight, turning at nine-under with her nearest challenge, Kim Metraux, four shots back.

A fifth birdie from off the green on 13 took Grant to double digits, and with the gallery watching as she walked down the last, she picked up one more shot on the 18th, the latest in a series of perfectly executed approaches onto the final green setting up a grandstand finish.

Grant, who earned cards for the 2022 LET and LPGA Tour at Q-School last year, had already shown her calibre with two runner-up finishes in 2021, making the most of invitations to the Didriksons Skaftö Open and the Creekhouse Ladies Open.

“I feel like with the two events in Sweden last year I got used to the LET a bit, so coming here this week wasn’t that huge a gap to cross, but still it was my first event,” said Grant.

Despite a four-shot cushion on the last hole, she admitted to feeling a little nervy over the final approach shot and putt. But her second turned out to be one of the best of the day. “I was going to aim pin high and to the right, but I changed at the last minute to go for it. The putt wasn’t that short, so it was nervy, but I was so happy I got it done with a birdie.”

It was a career-best finish for left-hander Metraux in South Africa.

The Swiss star maintained her good form from Friday into the weekend and reeled in four birdies on her way to a final day score of 71 (-2), capitalising on the par five first, eighth and tenth holes to pick up shots on her way to a sole second finish.

“It was quite good. I made a few mistakes here and there, and I had a couple of lip-outs but I was pleased with how I played again,” said the 26-year-old Swiss golfer of her first top 10 finish since last September.

Garcia began the day with back-to-back birdies to start her day, but bogeys on three and seven dropped her back to level par. She responded brilliantly with an eagle on the eighth and parred her way to successive top 10 finishes in as many LET tournaments this season.

“My strike was better today, but I couldn’t get any momentum going with the putter on the back nine,” Garcia said. “I am happy to see my game trend in the right direction, though and hopefully that trend continues to the Investec South African Women’s Open at Steenberg next week.”

Proudly South African, the Johannesburg-native welcomed the move from the City of Johannesburg to take the tournament to co-sanctioned status.

“The Joburg Ladies Open has always been really popular, and we local golfers are so incredibly grateful to Bongi Mokaba and the City of Johannesburg for this move. To have two chances to gain winner’s status on the LET is a huge incentive for us,” she said. “But you know, even if you don’t win, just to have the international competition on our shores for two weeks is massive, especially for the young pros who can’t afford to compete abroad.”

Grant’s earlier victories on the Sunshine Ladies Tour moved her to the summit of the Investec Order of Merit, and she is virtually untouchable on 3 032 points, with Garcia her nearest challenger for the title on 1 224. The Swede also banked 500 points with the win to take pole position in the 2022 Race to Costa Del Sol alongside Aramco Saudi Ladies International winner Georgia Hall and Magical Kenya Ladies Open victor Esther Henseleit.

PHOTO: Joburg Ladies Open 2022 champion Linn Grant not only completed a Sunshine Ladies Tour hat-trick, but secured her LET card until the end of the 2023 season with her 5-shot victory at Modderfontein Golf Club; credit Tristan Jones | Ladies European Tour.