MELKBOSSTRAND – Last year’s top amateur, Isabella van Rooyen – who turned professional weeks before the Standard Bank Pro-Am Series at Glendower last month – solidified her status as a force to be reckoned with when she claimed her first professional victory at Atlantic Beach Links on Wednesday.

The second tournament of the Standard Bank Pro-Am Series teed off outside of Gauteng for the first time since the eight-tournament series was first played, and in just her second start in the series, the 19-year old Royal Cape Golf Club player showed her pedigree. Following a round of four-under-par 68 to tie the top spot with her good friend and playing mate, Larissa du Preez in regulation, things had to come down to sudden death to decide the winner.

“I enjoyed it a lot,” said an elated Van Rooyen who had her father on the bag for her maiden win as a professional golfer. “I love playing with Larissa and if there’s anyone that I could a playoff with, it’s her, so I was happy it turned out this way. I kind of felt like I could win but I come here to win, obviously, otherwise I wouldn’t play if I didn’t think I could win. I’m hitting the ball nicely and it’s good to finally get it done.

“I think it’s good to win this early in my career but what I think is even better is the fact that Standard Bank is giving us opportunities to play these events just because the Sunshine Tour events end at the beginning of the year, so to have more tournaments to play and compete at a high level, is really helping.”

A rather shaky start yielded a bogey for Van Rooyen on Wednesday but the country’s former number one amateur recovered with the expertise of a veteran. She made four straight pars before finally making a birdie to bring it back to level-par. She followed that up with three straight pars before making four birdies in the next six holes. Then, she dropped on 16 but closed off with a birdie to tie du Preez who still had two holes to play.

“I played some solid approach shots,” she said, explaining what she felt were the strongest aspects of her game on Wednesday, “I didn’t hit a lot of greens on the first nine, which doesn’t usually happen, but it’s fine. But I was hitting most of the fairways; I think I hit 12 fairways today but I think my approach shots were a little bit better than usual and I started to hit a few more greens on the back nine and I was able to make a few putts.”

Du Preez finished with a brace of pars to secure a playoff with Van Rooyen who was already in the clubhouse on four-under.

END_OF_DOCUMENT_TOKEN_TO_BE_REPLACED 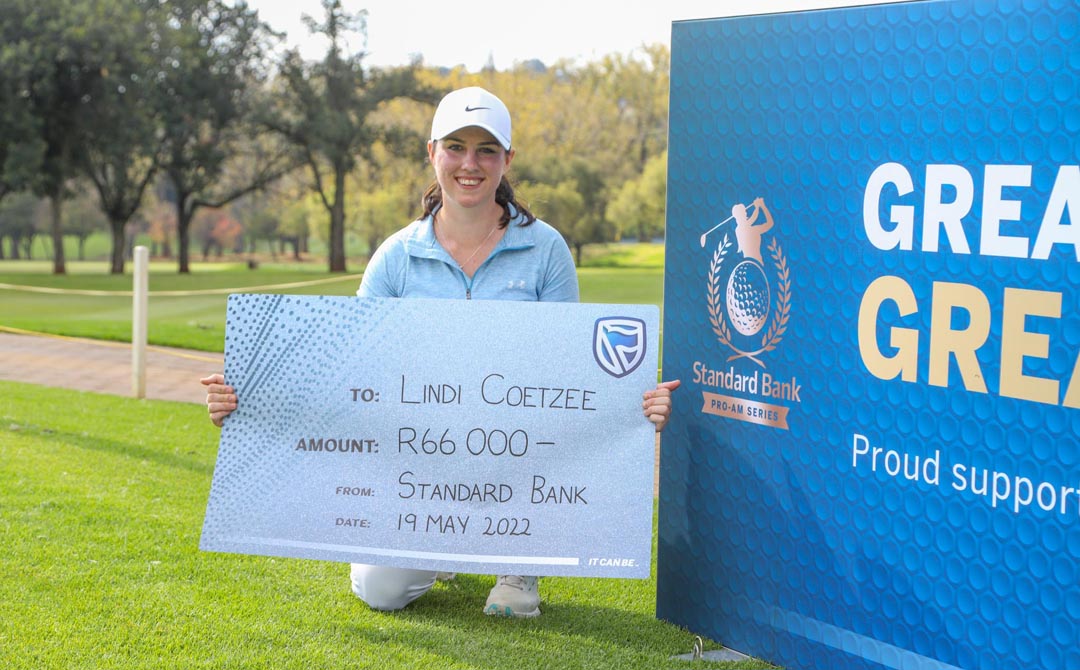 JOHANNESBURG - South African female professional Lindi Coetzee says her maiden win in the Standard Bank Pro-Am series tournament at Glendower Golf Club on Thursday will bring with it a welcome degree of pressure as the season rolls on. Coetzee backed up an opening...

This website uses cookies to improve your experience while you navigate through the website. Out of these, the cookies that are categorized as necessary are stored on your browser as they are essential for the working of basic functionalities of the website. We also use third-party cookies that help us analyze and understand how you use this website. These cookies will be stored in your browser only with your consent. You also have the option to opt-out of these cookies. But opting out of some of these cookies may affect your browsing experience.
Necessary Always Enabled
Necessary cookies are absolutely essential for the website to function properly. These cookies ensure basic functionalities and security features of the website, anonymously.
Functional
Functional cookies help to perform certain functionalities like sharing the content of the website on social media platforms, collect feedbacks, and other third-party features.
Performance
Performance cookies are used to understand and analyze the key performance indexes of the website which helps in delivering a better user experience for the visitors.
Analytics
Analytical cookies are used to understand how visitors interact with the website. These cookies help provide information on metrics the number of visitors, bounce rate, traffic source, etc.
Advertisement
Advertisement cookies are used to provide visitors with relevant ads and marketing campaigns. These cookies track visitors across websites and collect information to provide customized ads.
Others
Other uncategorized cookies are those that are being analyzed and have not been classified into a category as yet.
SAVE & ACCEPT
Next Up
Previous